My Night with Aretha

The great Aretha Franklin died today. I saw her only once, in 2008, and wrote about it for an arts blog: 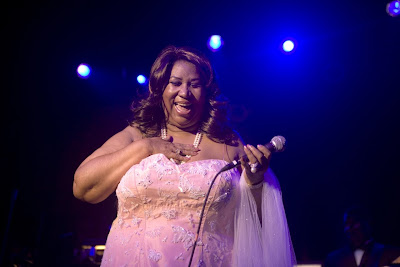 Aretha Franklin gets a little respect in East Hampton. Photo by Cesar Vera/Ross.

I am staring into Christie Brinkley’s baby-blue eyes. This does not look like someone who has just gone through an ugly divorce, someone whose exploding private life has been splattered all over the tabloids. Her face beams; her gleaming blonde hair falls, on one side, behind a small ear; her nose, too, is very small—indeed, there’s something rather touching about it. She has a childlike quality, and I suddenly remember her singing “The Good Ship Lollipop,” Shirley Temple-style, during a Barbara Walters interview years ago. I’ve asked her what song she hopes Aretha Franklin will do—that’s why we’re all in this auditorium on the Upper Campus of the Ross School, in East Hampton, on a gorgeous summer night; we’re waiting for the Queen of Soul to get down and dirty in a building called the Center for Well-Being.

Of course Christie (I feel I can now call her Christie, as you would too if she had flashed that dazzling smile at you—just forget Julia Roberts altogether) mentions “Respect,” but she then says something totally disarming: “And what’s that one that Candice Bergen sang?” Huh? “You know,” she continues, “after Murphy Brown has the baby?”

“Yes!” she says, this Uptown Girl, this inspiration for Billy Joel’s “A Matter of Trust.” She will not, as it turns out, be disappointed. (I will; I wanted “Until You Come Back to Me,” a sly song that instantly slows your heartbeat down to a sexy, insinuating rhythm). 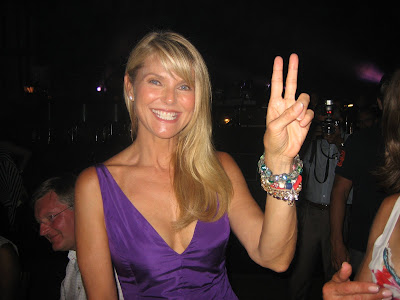 Indeed, less than 15 minutes later, only two songs into her set, Aretha Franklin—super-singer to Christie’s supermodel—launches into “Natural Woman,” the pearls forming her pink gown’s halter strap bouncing away, the brass section swaying. At the end, Aretha holds back just a little before hitting the stratosphere with that final “wo-ma-an.” I can’t see Brinkley through the crowd but I’m guessing that she, in a low-cut but tasteful purple dress, is standing, jumping, and hollering with the rest of us.

Which includes actress Rosie Perez, View host Joy Behar, producer Darren Starr, and the writer Terry McMillan, whom Aretha introduces from the stage. McMillan, chic in a white sarong-type skirt, flounces and waves when Aretha praises her “magnificence and savoir faire”; the singer then adds, “The next book can be How Aretha Got Her Groove Back—she lost some weight!”

Of course, as she rips through such hits as “Higher,” “The House That Jack Built,” and “Think,” it’s clear that Aretha never lost her groove and never will. When she wraps her lungs around the glorious aria “Nessum Dorma”—which brought down the house at the 1998 Grammys, when Franklin took over at the last minute for Pavarotti—you feel she has joined spirituality with funkiness in a way to make even the angels moan.

Tonight, she is donating her formidable services as a benefit for the school—founded by Courtney Ross, the widow of Time Warner’s Steve Ross—which she’s also endowed with a scholarship for performing-arts study. Perhaps as a nod to the importance of education, this most instinctive of performers says while introducing her band (her son Teddy White is on guitar), “There is nothing a singer likes better than having her music played correctly.” All the better for bringing an audience to fever pitch with “Freeway of Love,” announcing that she too is “feelin’ pretty good right now,” and leaving us spent, fulfilled, and yet wanting more.

To wean us off the music, a Latin combo begins to play under a tent adjoining the building. I walk that way, red wine in hand, Franklin voice ringing in my ears, and spot Christie, still smiling and luminescing among the crowd. (Brinkley also funds a scholarship, centering on the environment, for the school, which her daughter Alexa attended and son, Jack, currently attends.)

Later, as I sit outside the center on a boulder (perfectly appointed, as everything seems to be at this tony school set in the woods) and wait for a cab, I watch the many band members carry their instruments to vans and limos. Finally, the Queen herself emerges, a tall gentleman at each elbow escorting her. She has changed into street clothes and looks smaller between the men, her pumps (too big because of her weight loss?) making me think of Minnie Mouse. Her entire lower face and neck are enwrapped in a white muffler—paparazzi-proofing perhaps, but more likely protection for that golden throat against the cool night air. My companion, on the boulder beside me, begins to clap when he sees her, and Aretha turns and gives us, yes, a regal nod.

Sock it to me.